In this post we follow Abram/Abraham and Lot around the Middle East, Witness God’s first plague, see Abraham the Liar in action, watch Lot’s and Abraham’s relationship change in the blink of an eye, see Abraham the Warlord in action, and discover that God can’t read a compass

For the next few chapters of Genesis we follow the life of Abram or as he will be called later, Abraham.  At the beginning of this chapter we fade in on Abram as God tells him to take Sarai his wife, Lot his nephew, all their possessions and slaves, and leave Haran on a journey to Canaan, which Abram promptly does in 1963 BC at the age of 75 (Gen 12:1-5)

Since we learned at the end of chapter 11 that Haran was in the land of Canaan, Abram and his posse basically journeyed from Canaan to Canaan, or to put it another way, they walked in a big circle. And settled on “the plain of Moreh (tree)” (Gen 12:6) in modern Day Israel, not to be confused with Moria which was not in Canaan, but rather in the Misty Mountains.

God appears to Abram by the tree, and gives him the land around it, Abram builds an altar, says “thanks” and heads south. (Gen 12:7-9)

Abram then finds out that there is a famine in the south, so he heads for Egypt. (Gen 12:10)

While on the way to Egypt, Abram tells Sarai that since she is so hot the Egyptians will kill him and take her if they think she’s his wife, so she should pretend to be his sister. (Gen 12:11-13)  Had the Egyptians known about Abram’s family’s history of incest, they would have killed him anyway thinking that sister would also mean wife.  Sure enough, when they get into Egypt, the Egyptians see the hottie with Abram and take her to the Pharaoh who gives Abram some animals and slaves for her while under the impression that she’s his sister but not wife. (Gen 12:14-16)  Apparently sisters were worth drought animals and slaves back then.  Abram seems to be OK with his wife living with the Pharaoh, after all he got new slaves and camels, but God doesn’t approve.

God sees what is going on and sends his very first plague down on the Pharaoh and his family (Gen 12:17) thus beginning God’s habit of hurting children to get his way. There is no mention by Egyptians of any plagues during Senusret 1’s reign, but they may have been embarrassed about the whole sister/wife mix up and told everybody in the Middle East who could write to ignore it.

Pharoah goes to Abram and asks him why he lied about Sarai being his sister, and thus getting him in trouble with the plague god, then tells Abram to take his hot wife, and all his stuff and leave.  Abram does as he’s asked and leaves along with all the new stuff he had gotten for pimping out his wife. (Gen:18-20)

So, having been ejected from Egypt, Abram and his posse take all their stuff and go to Bethel. (Gen 13:1-4)  13:1 says that they headed south, but Bethel is north-east of Egypt in modern-day Israel.  So, either Abram circumnavigated the globe going south to north, the poles have changed since then, or the divinely inspired word of God or God himself has problems with a compass.  The latter would explain the whole walking in circles thing earlier.

It seems that Lot had been doing quite well for himself also, because we learn that Lot went along with Abram, but they each had so many sheep and goats, that the cowhands of the two of them started getting into fights.(Gen 13:5-7)

So Abram and Lot have a meeting to sort hings out.  Abram tells Lot that with all the land around them, that there shouldn’t be any reason to fight, and told Lot that he could pick half and Abram would take the other half. (Gen 13:8-9)

So, Lot looked around and decided that he liked the “plain of Jordan”, and headed east toward Jordan where the wicked city of Sodom was. (Gen 13:10-13)  Lot, it seems, could read a compass and went the right way.

After Lot left, God told Abram to stand in the place where he lived:  now face north, east, west, and south, and that all of the land he could see would belong to him and his descendants forever. (Gen 13:14-17)  So, having figured out a compass, Abram packed up and moved to Hebron which ironically, is in the land now called the West Bank or Palestinian territories, where he built another altar. (Gen 13:18)

As it turns out, Lot hadn’t made a very good choice about where to live.  It seems that war was rampant in the area, and eventually Lot ended up being captured along with all of his stuff, by the kings who defeated the kings of Sodom and Gomorrah. (Gen 14: 1-12) 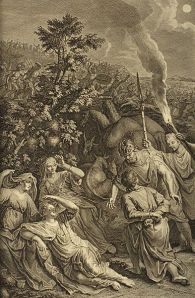 One guy escaped from the whole mess and went and told Abram what had happened. (Gen 14:13)  When Abram heard what had happened to Lot (who was now suddenly his brother, and not his nephew) he armed his servants and they went and smote the bad guys and rescued Lot and his lot, as well as the other people who had been captured in Sodom and Gomorrah. (Gen 14:14-16)

Why God had decided to make Lot, Abram’s brother is not explained.  It’s possible that he was trying to correct the mess with Lot’s uncle also being his brother-in-law.  Though this made it worse, because now his brother was also his brother-in-law.  Well, as the old saying goes: incest is best, put your sister to the test. 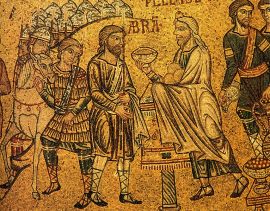 So, when Abram got back from his smoteing trip, the King of Sodom who had been stuck in a slime pit since 14:10, came out to meet him.  He heaped a bunch of flattery on Abram and then said that he could keep the spoils looted from his kingdom, if Abram would just give his subjects back to him. (Gen 14:17-21)  Seems like a nice enough offer.

Abram got a little holier-than-thou with the king and said that he wouldn’t keep a dime of the spoils other than what his men had already eaten or taken, so that the king wouldn’t be able to say that Abram was rich because of him. (Gen 14:22-24)

So, after the smoteing, God came to Abram in a dream and took credit for everything that Abram had accomplished.  Abram whined about not having any kids, and God promised him that he would eventually have lots of kids, and Abram took his word for it. (Gen 15:1-6)

So Abram got the animals, cut the cow and goats in half, placed butchered animals side by side with the birds on top like cherries.  He kept the vultures off of the carcasses, and when it got dark fell asleep and had a nightmare. (Gen 15:10-12)

In his nightmare, God told Abram that his descendants would end up slaves for 400 years in a foreign land, but, with God’s help, would come out with “great substance”, and that Abram himself would die peacefully of old age. Then, four generations after Abram dies, his descendants would come back to the land he was in and win a war with the Amorites who would by then deserve it. (Gen 15:13-17)

The same day, God gave Abram all the land between the Nile and the Euphrates. (Gen 15:18-21)  Apparently, nobody told the Egyptians about this, because there is no record of the Egyptians losing half their kingdom during the 12th Dynasty.  In fact it is one of the more stable periods in their history.  But, God’s divine authors seem to overlook reality quite a bit, so why be historically accurate at this point.

So, next time we continue on with the stories of Abraham when he starts having bastard children, he and his wife get name changes, guys start losing foreskin to the knife, and God spots sin in Sodom.  Sounds like a lot of fun, see you then.  Ron